As I was making some false statements about how I think geometrically finite ends of a hyperbolic three manifold would look like, professor Gabai pointed out this super cool fact (proved by Cannon and Thurston, 2007) that the figure-eight knot complement admits a hyperbolic structure and fibers over the circle, but if we lift any fiber (which would be a surface) into the hyperbolic 3-space, the resulting surface would be an embedded topological disc with limit set being the whole limit 2-sphere (!) i.e. if we see

as a Euclidean open ball, then the boundary of such a disc is a Peano curve that covers the whole 2-sphere bounding

After playing with chicken wire and playdo for a few days, I am finally able to visualize the fibration. Here I want to point out a few simple points discovered in the process.

To find a fibration over the circle, we need to give a surface that spans the knot (such surface is called a Seifert surface) and a homotopy of the surface

which restricts to a bijection from

For quite some time, I tried with the following surface:

Since it’s perfectly symmetric (via a rotation by

), we only need to produce a homotopy that sends

to the symmetric Seifert surface in the upper half plane. I was not able to find one. (I’m still curious if there is such homotopy, if so, then there are more than one way the knot complement can fiber)

It turns out that there are in fact non-homeomorphic (hence of course non-homotopic) Seifert surfaces spanning the knot, the one I end up using for the fibration is the following surface:

Or equivlently, we may connect the two ends at a finite point. 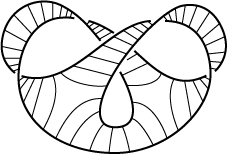 To see the boundary is indeed the figure-8 knot: 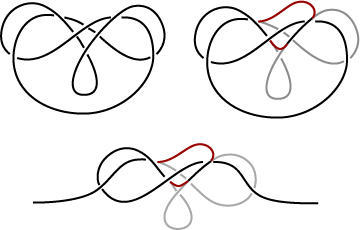 Note that this surface is not homeomorphic to the pervious one because this one is orientable and the pervious is not.

Now I’ll leave it as a brain exercise to see the homotopy. (well…this is largely because it takes forever to draw enough pictures for expressing that) A hint on how the it goes: think of the homotopy as a continuous family of disjoint Seifert surfaces that ‘swipes through’ the whole

and returns to the initial one. As in the picture above, our surface is like a disc with two intertwined stripe handles on it, each handle is two twists in it. The major step is to see that one can ‘pass’ the disc through a double-twisted handle by making the interior of the old disc to become the interior of the new handle. i.e. we can homotope the bowl from under the strap to above the strap with a family of disjoint surfaces with same boundary.

In in figure-8 knot case, the disc would need to pass through both straps and return to itself.