Eric Carlen from Rutgers gave a colloquium last week in which he bought up some curious questions and facts regarding the ‘stability’ of standard geometric inequalities such as the isoperimetric and Brunn-Minkowski inequality. To prevent myself from forgetting it, I’m dropping a short note on this matter here. Interestingly I was unable to locate any reference to this nor did I take any notes, hence this post is completely based on my recollection of a lunch five days ago.

–Many thanks to Marco Barchies, serval very high-quality references are located now. It turns out that starting with Fusco-Maggi-Pratelli ’06  which contains a full proof of the sharp bound, there has been a collective progress on shorter/different proofs and variations of the theorem made. See comments below!

As we all know, for sets in

, the isoperimetric inequality is sharp only when the set is a round ball. Now what if it’s ‘almost sharp’? Do we always have to have a set that’s ‘close’ to a round sphere? What’s the appropriate sense of ‘closeness’ to use?

One might first attempt to use the Hausdorff distance:

However, we can easily see that, in dimension

or higher, a ball of radius slightly small than

with a long and thin finger sticking out would have volume

larger than that of the unit ball, but huge Hausdorff distance:

In the plane, however it’s a classical theorem that any region

is because I forgot the exact bound, but should be linear in

So what distance should we consider in higher dimensions? Turns out the nature thing is the

is the symmetric difference.

First we can see that this clearly solves our problem with the thin finger:

to have volume 1. Let

denote the ball with n-dimensional volume 1 in

dimensional) measure of the boundary of

Now we have a relation

As said in the talk (and I can’t find any source to verify), there was a result in the 90’s that

and the square one is fairly recent. The sharp constant

is still unknown (not that I care much about the actual constant).

Take the simplest case, if we have a n-dimensional unit cube

, how does the left and right hand side change when we perturbe it to a rectangle with small eccentricity?

As we can see,

. The new boundary consists of two faces with measure

. Hence the linear term cancels out and we are left with a change in the order of

! (well, actually to keep the volume 1, we need to have

, but it would still give

It’s not hard to see that ellipses with small eccentricity behaves like rectangles.

Hence the square here is actually sharp. One can check that no matter how many of the

side-length you perturbe, as long as the volume stay the same (up to

) the linear term of the change in boundary measure always cancels out.

There is an analoge of this stability theorem for the Brunn-Minkowski inequality, i.e. Given two sets of volume

, if the sum set has volume only a little bit larger than that of two round balls with those volumes, are the sets

close to round balls? I believe it’s said this is only known under some restrictions on the sets (such as convex), which is strange to me since non-convex sets would only make the inequality worse (meaning the sum set has larger volume), don’t they? 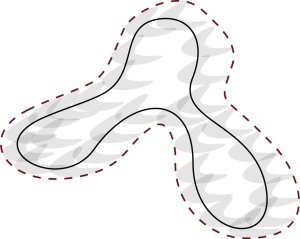 I just can’t think of what could possibly go wrong for non-convex sets…(Really hope to find some reference on that!)

Anyways, speaking of sum sets, the following question recently caught my imagination (pointed out to me by Percy Wong, thank him~ and I shall quote him ‘this might sound like probability, but it’s really geometry!’):

is the expected value,

are independent random variables with a standard normal distribution (mean 0, variance 1) and

, can we always find

To find out more about the question, see Chapter 4 of this book. By the way, I should mention that there is a $5000 prize for this :-P