First, let’s clarify that this post has nothing to do with the Kakeya conjecture (except for the word ‘needle’ in it). Anyways, I was asked the following question via an e-mail from Charles this summer: (It turns out that the question was invented by Jonathan King and then communicated to Morris Hirsch and that’s where Charles heard about it from) In any case, I find the problem quite cute:

Problem: Given a smoothly embedded copy of

. Is it always possible to continuously slide a unit length needle lying on the ray

, while keeping the head and tail of the needle on the curve throughout the process?

i.e. the curve is straight once it passes the point

, but can be bad between the two points:

We are interested in sliding the needle from the neigative

-axis to the positive

Exercise: Try a few examples! It’s quite amusing to see that sometimes both ends of the needle needs to go back and forth along the curve many times, yet it always seem to get through.

One should note that this is not possible if we just require the curve to be eventually straight and goes to infinity at both ends. As we can see on a simple ‘hair clip’ curve:

The curve consists of two parallel rays of distance

apart, connected with a semicircle. A unit needle can never get from one ray to the other since the needle would have to rotate

degrees and hence it has to be vertical at some point in the process, but no two points on the curve has vertical distance

After some thought, I think I can show for each given curve, 'generic' needle length can pass through:

embedding as above, there is a full measure and dense

of lengths where the needle of any length

can slide through the curve.

be a smooth parametrization of the curve s.t.

vanishes on the diagonal and takes positive value everywhere else.
Since 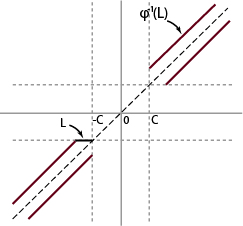 Observation: a needle of length

connecting the two rays above the diagonal. (This is merely projection onto the

other than on the diagonal. (It behaves like the absolute value function near the diagonal). By Sard’s theorem, since

, the set of critical values is both measure

be the set of regular values of

is compact, we can find large

The same holds with

in the shaded region below:

dimensional sub-manifold, outside a bounded region it contains only two rays. We also know that the level set is bounded away from the diagonal since

vanishes on the diagonal. By an non-ending arc argument, one connected component of

must be a curve connecting the end points of the two rays. Establishes the claim.

Remarks: This problem happens to come up at the very end (questio/answer part) of Charles’s talk in the midwest dynamics conference last month (where he talked about our joint work about funnel sections). A couple weeks later Michal Misiurewicz e-mailed us a counter-example when the curve is not smooth (only continuous).

needle. Everything works fine until a point where one has a continuum in the level set connecting the end-points of the two rays. We want the continuum to be path connected. I got stuck on that. In the continuous curve case, Michal’s counter-example corresponds to the continuum containing a

curve, hence is not path connected.

I believe such thing cannot happen for smooth. The hope would be that the length

needle can slide through any

) curve. (Note that once the length