This is a little note about constructing a Riemannian 2-sphere which has longer shortest geodesic than the round 2-sphere of same area.

So there has been this thing called ‘mathematical conversations’ at the IAS, which involves someone present a topic that’s elementary enough to be accessible to mathematicians in all fields and yet can be expanded in different directions and lead into interesting interdisciplinary discussions.

Nancy Hingston gave one of those conversations about simple geodesics on the two-sphere one night and I was (thanks to Maria Trnkova who dragged me in) able to attend.

Something about this talk obviously touched my ‘systolic nerve’, so when the discussion session came up I asked whether we have bounds on ‘length of longest possible shortest closed geodesic on a sphere with unit area’. The question seem to have generated some interest in the audience and resulted in a back-and-forth discussion (some of which I had no clue what they were talking about). So the conclusion was at least nobody knows such a result on top of their head and perhaps optimum is obtained by the round sphere.

A couple of post-docs caught me afterwards (Unfortunately I didn’t get their names down, if you happen to know who they are, tell me~) and suggested that suspending a smooth triangular region and smoothen the corners might have longer shortest geodesic than the round sphere:

The evidence being the fact that on the plane a rounded corner triangular contour has larger ‘width’ than the disc of same area. (note such thing can be made to have same width in all directions)

Well that’s pretty nice, so I went home and did a little high-school computations. The difficulty about the pillow is that the shortest geodesic isn’t necessarily the one that goes through the ‘tip’ and ‘mid-point of the base’, something else might be shorter. I have no idea how to argue that.

So I ended up going with something much simpler, namely gluing together two identical copies of the flat equilateral triangles. This can be made to a Riemannian metric by smoothing the edge and corners a little bit:

Okay, now the situation is super simple~ I want to prove that this ‘sphere’ (let’s call it

from now on) has shortest geodesic longer than the round sphere (

Of course we suppose both

Claim: The shortest geodesic on

(which is length of the one through the tip and mid-point of the opposite edge.)

Proof: The shortest closed geodesic passing through the corner is the one described above, since any other such geodesics must contain two symmetric segments from the corner to the bottom edge on the two triangles, those two segments alone is longer than the one orthogonal to the edge.

That middle one has length

First we observe any closed geodesic not passing through the corner is a periodical billiard path in the triangular table with even period.

So let’s ‘unfold’ the triangles on the plane. Such periodic orbits correspond to connecting two corresponding points on a pair of identified parallel edges and the segment between them intersecting an even number of tiles.

W.L.O.G we assume the first point in on edge

. Since we are interested in orbits having shortest length, let’s take neighborhood of radius

: (all edges with arrows are identified copies of 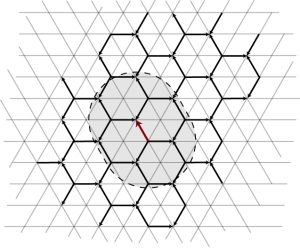 There are only 6 parallel copies of

Note that no matter what point

we start with, the distance from

. (easy to see since one can slide the segments to begin and end on vertices.)

Hence we conclude there are no shorter periodic billiard paths, i.e. the shortest closed geodesic on

Note it’s curious that there are a huge amount of closed geodesics of that particular length, most of them are not even simple! However it seems that after we smoothen

~ So the surface area is

hence the radius is

Any closed geodesics is a multiple of a great circle, hence the shortest geodesic has length

, which is just slightly shorter than

Now the natural question arises: if the round sphere is not optimum, then what is the optimum?

At this point I looked into the literature a little bit, turns out this problem is quite well-studied and there is a conjecture by Christopher Croke that the optimum is exactly

. (Of course this optimum is achieved by our singular triangle metric hence after smoothing it would be

There is even some recent progress made by Alex Nabutovsky and Regina Rotman from (our!) University of Toronto! See this and this. In particular, one of the things they proved was that the shortest geodesic on a unit area sphere cannot be longer than

, which I believe is the best known bound to date. (i.e. there is still some room to

Random remark: The essential difference between this and the systolic questions is that the sphere is simply connected. So the usual starting point, namely ‘lift to universal cover’ for attacking systolic questions does not work. There is also the essential difference where, for example, the question I addressed above regarding whether the shortest geodesic is simple would not exist in systolic situation since we can always split the curve into two pieces and tighten them up, at least one would still be homotopically non-trivial. In conclusion since this question sees no topology but only the geometry of the metric, I find it interesting in its own way.