So~ After 2.5 weeks of wonderful math discussions with Amie and Charles, I finished my winter vacation and got back to Princeton! (and back to my normal blogging Sundays ^^)

One thing I would like to shear here is that we (me and Charles) finally got an answer to the following question that’s been haunting me for a while:

containing a neighborhood of

in its interior. Given parametrizations

Is it true that for all

in the uniform norm implies the Riemann maps

to the interiors of

that fixes the origin and have positive real derivatives at

would be at most

First, I think the development and problem-solving process for this one is quite interesting and worth mentioning (skip this if you just want to see math):

The problem was initially of interest because I stated a lemma on our Jordan curves paper which asserts the above projection map is continuous at smooth curves. To my surprise, I was unable to prove this seemingly-direct lemma. I turned to Charles for help, after a day or so of thinking he proved it for smooth curves (via a very clever usage of cross-cuts as in the proof of Carathedory’s theorem) and asked back whether the map is actually continuous at all points.

This seemed to be such a natural question but we couldn’t find it in the literature. For a day or so we were both feeling negative about this since the cross-cut method fails when the Jordan curve has positive measure, which “should” happen a lot. In any case, I posted a question on mathoverflow to see if there is a standard theorem out there implying this. Almost right after I posted the question, during a wonderful lunch-conversation with Charles, I got this wonderful idea of applying extremal length techniques not to the semi-circular crosscut but only to the ‘feet’ of it. Which later that day turned out to be a proof of the continuity.

The next morning, after confirming the steps of the proof and made sure it works, I was thrilled to find that Thurston responded to the post and explained his intuition that the answer is positive. Although having solved the problem already, I am still amazed by his insights ^^ (It’s the second question I asked there, he left an comment again! It just feels great to have your idol giving you ideas, isn’t it? :-P)

Later on, McMullen pointed out to us that in fact a book by Pommerenke contains the result. Nevertheless, it was great fun proving this, hence I decided to sketch the proof here ^^

Ingredients of the proof: We quote the following well-known but weaker theorem (one can find this in, for example Goluzin’s classical book, p228)

We also use the following topological lemma:

be a parametrization. For all

is the short arc in

The proof of the lemma is left as an exercise

Proof of the Theorem:

as in the theorem, apply the lemma to

so that all curves

-apart has diameter no more than

, we can choose finitely many crosscut neignbourhoods

are "semi-discs" around points in

By extremal length, we can choose the cross-cuts

is the canonical Riemann map corresponding to

. Hence by lemma, we also get 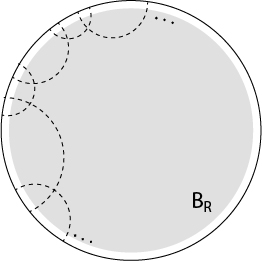 By the above theorem in Goluzin, since

is compact, there exists a

be the canonical Riemann map corresponding to

First note that assuming the theorem in Goluzin, it suffice to show

. Apply the extremal length to the set of radial segments in the almost-rectangle

We conclude there exists

by a semicircle contained in

, denote the enclosed region by

into three parts and estimate diameter of each part separately.

is another parametrization of

hence the union of the two has diameter at most

Length of the arcs

. By lemma, this implies the arc in

has length at most

Hence altogether the we have