Recently I came across a paper by John Pardon – a senior undergrad here at Princeton; in which he answered a question by Gromov regarding “knot distortion”. I found the paper being pretty cool, hence I wish to highlight the ideas here and perhaps give a more pictorial exposition.

This version is a bit different from one in the paper and is the improved version he had after taking some suggestions from professor Gabai. (and the bound was improved to a linear one)

Definition: Given a rectifiable Jordan curve

i.e. the maximum ratio between distance on the curve and the distance after embedding. Indeed one should think of this as measuring how much the embedding ‘distort’ the metric.

, define the distortion of

to be the infimum of distortion over all possible embedding of

It was (somewhat surprisingly) an open problem whether there exists knots with arbitrarily large distortion.

Question: (Gromov ’83) Does there exist a sequence of knots

Now comes the main result in the paper: (In fact he proved a more general version with knots on genus

surfaces, for simplicity of notation I would focus only on torus knots)

Theorem: (Pardon) For the torus knot

To prove this, let’s make a few observations first:

First, fix a standard embedding of

(say the surface obtained by rotating the unit circle centered at

knot’ (here’s what the ‘standard 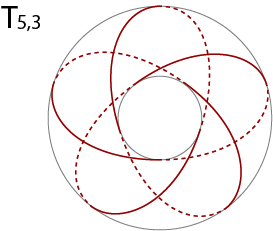 By definition, an ’embedding of the knot’, is a homeomorphism

that carries the standard

to the ‘distorted knot’. Hence the knot will lie on the image of the torus (perhaps badly distorted): 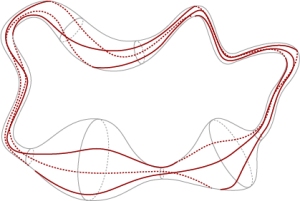 is inessential if it contains no homotopically non-trivial loop on

Fact 1: Any homotopically non-trivial loop on

that bounds a disc disjoint from

times. (hence the same holds for the embedded copy

As an example, here’s what happens to the two generators of

(they have at least

From there we should expect all loops to have at least that many intersections.

Fact 2: For any curve

and any cylinder set

i.e. The length of a curve in the cylinder set is at least the integral over

-axis of the intersection number with the level-discs.

This is merely saying the curve is longer than its ‘vertical variation’:

Similarly, by considering variation in the radial direction, we also have

Proof of the theorem

, we find an embedding

i.e. one should consider

as the smallest radius around

so that the whole ‘genus’ of

It’s easy to see that

is a positive Lipschitz function on

that blows up at infinity. Hence the minimum value is achieved. Pick

is at the origin and

(and note distortion is invariant under scaling), we have

where the intersection number is less or equal to the average. i.e.

We will drive a contradiction by showing there exists

By fact 2, there exists

is a sphere; at

it splits to two spheres. (the space between the upper and lower halves is only there for easier visualization)

Note that during the whole process the intersection number

is monotonically increasing. Since

, it increases no more than

Observe that under such ‘cutting homotopy’,

is also inessential. (to ‘cut through the genus’ requires at least

many intersections at some stage of the cutting process, but we have less than

is disconnected, the ‘genus’ can only lie in one of the spheres, we have one of

is inessential. Establishes the claim.

direction, i.e.cutting the hemisphere in half in

The last cutting homotopy has at most

many intersections, hence has inessential complement.

Hence at the end we have an approximate

ball with each side having length at most

, this shape certainly lies inside some ball of radius

Let the center of the

. Since the complement of the

in an inessential set, we have